Incumbent Republican Sen. Marco Rubio is telegraphing what he considers one of his biggest political assets in Florida against Rep. Val Demings, his likely Democratic challenger in what could become one of the most expensive US Senate races in history.

Rubio’s latest attack strategy as he seeks reelection in the battleground state is to tout his work co-authoring the $800 billion Paycheck Protection Program, a coronavirus rescue measure that allowed small businesses to borrow forgivable loans from the federal government to keep workers on the payroll.

In a digital ad out Monday, the Rubio campaign contrasts the senator’s work on the PPP in March 2020, during the early days of the pandemic, with media interviews Demings took around the same time. In them, she was asked about the possibility of then-Democratic presidential candidate Joe Biden picking her as his running mate.

“While Val focused on politics, Marco got to work,” says the ad, dubbed “The Choice is Clear” and provided exclusively to Insider. Read More

Jackson won a 53-47 vote as three Senate Republicans–U.S. Sens. Susan Collins of Maine, Lisa Murkowski of Alaska and Mitt Romney of Utah–joined every Democrat in supporting the nomination.

“Today’s confirmation of Ketanji Brown Jackson reflects the continued danger of a Democrat-controlled Senate. KBJ is outside the mainstream on many legal issues and failed to give satisfactory answers to some very basic questions during her hearing, such as why she was consistently lenient on child sexual predators. Radical Senate Democrats have consistently voted however Joe Biden and Chuck Schumer ask them to. Today is no different,” said Scott. Read More

With many pundits expecting a so-called “red wave” in November, a number of Republicans are running for Congressional seats in Florida that are currently held by Democrats.

This as we wait to see what those districts look like after a special session on redistricting results in a new Congressional map.

In the case of District 21, there are 8 candidates running in a GOP primary this August.

This time, Wheelen says, he felt the need to run for office himself. He claims that he’s the only one that stands a chance against the current office holder. 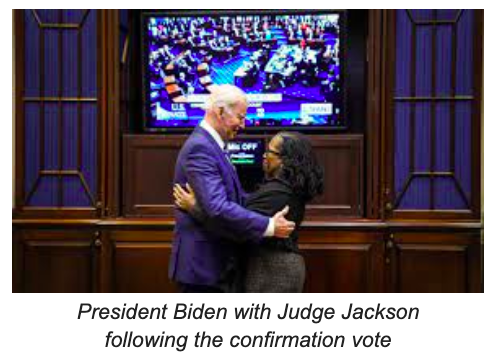 Judge Ketanji Brown Jackson was confirmed as the first Black woman to sit on the Supreme Court in a bipartisan, 53-47 Senate vote Thursday. All 50 members of the Democratic caucus were joined by Republican Senators Susan Collins (ME), Lisa Murkowski (AK) and Mitt Romney (UT) in confirming Jackson, who is slated to replace retiring Supreme Court Justice Stephen Breyer.

In a recent poll, nearly two-thirds of Americans said they supported her confirmation, making her one of the most popular Supreme Court nominees in recent history. During her Senate hearings, Judge Jackson emphasized the importance of voting rights in a

functioning democracy. A graduate of Harvard Law School, her experience includes working as a public defender and serving as the vice-chair of the United States Sentencing Commission. Most recently she served as a federal judge on the U.S. Court of Appeals for the Washington D.C. Circuit.

“Judge Jackson’s record shows that she will be a champion of equal justice and civil rights for all Americans,” said Robert Roach, Jr., President of the Alliance. “She is exceptionally qualified. We are confident that she will defend the right of all workers to join a union and protect older workers from discrimination as a Supreme Court Justice.”

Medicare Limits Coverage of Aduhelm to Patients in Clinical Trials

Citing data showing the new Alzheimer’s drug Aduhelm has serious safety risks and may not help patients,  Medicare officials decided Thursday to limit coverage of the drug to patients in clinical trials. The decision is extremely unusual for Medicare, which traditionally pays for drugs that the Food and Drug Administration has approved, at least for the medical conditions designated on labels.

According to The New York Times, some advocacy groups had said that Medicare must pay for a drug approved by the FDA. However, many Alzheimer’s doctors and experts cautioned against

broadly covering a treatment that scientific evidence shows has uncertain benefit and serious safety risks. Individual patients and families weighed in emotionally from both sides.

Last year, Medicare’s actuarial division, acting without knowing what the coverage decision would be, imposed one of the biggest-ever increases in Medicare Part B premiums for 2022. The Centers for Medicare and Medicaid Services (CMS) said that half of the 14.55% increase in the premiums for 2022 was due to the cost of Aduhelm, which was then priced by its manufacturer, Biogen, at $56,000 a year.

Since then, Biogen, facing weak sales of the drug after many hospitals and doctors chose not to prescribe it, lowered the price to $28,800 a year, still much higher than what many analysts have said is defensible.

Xavier Becerra, Secretary of the U.S. Department of Health and Human Services, said previously that he would consider lowering Medicare Part B premiums after the final coverage decision for Aduhelm is made, adding, “We’re going to make sure that seniors don’t pay more than they have to.”

On Thursday, Chiquita Brooks-LaSure, the administrator of CMS, said, “The secretary told us to look at it, and we are going to engage in the process of reviewing the Part B premium.”

“Allowing Medicare to negotiate the cost of prescription drugs would go a long way toward diminishing the effect Aduhelm has on Medicare premiums,” said Richard Fiesta, Executive Director of the Alliance. “It would make a lot more sense to make decisions based on numbers that include giving Medicare that ability.”

The chances of passing legislation this year to lower the price of insulin are looking brighter as the Senate undertakes a bipartisan effort to address the issue.

Senate Majority Leader Chuck Schumer (NY) has tapped Senators Collins (R) and Jeanne Shaheen (D-NH) to take the lead in crafting a compromise that members of both parties can accept. The House previously voted on March 31 to pass a more limited bill that caps out-of-pocket insulin costs for many patients with insurance at $35 a month.

Sen. Collins said in an interview March 30 that she and Sen. Shaheen came up with an outline based on a bill they worked on three years ago. It goes beyond capping what diabetes patients pay and aims to bring down the prices that drug corporations charge.

“The House bill in March was a positive step, and the Senate bill sounds promising, but a broader bill that also brings down the prices of other drugs would clearly be even better,” said Executive Director Fiesta. “The 4.4 million members of the Alliance urge the members of the Senate to pass legislation that is similar to what the House passed in November as part of H.R. 5376, the Build Back Better Act. That requires Medicare to negotiate prices for insulin as well as many other prescription drugs. H.R. 5376 also included provisions that capped out-of-pocket prescription drug costs at $2,000 per year under Medicare Part D.”

Kilolo Kijakazi, Acting Commissioner of the Social Security Administration (SSA), announced this week that Social Security Field Offices would re-open nationwide on April 7 for the first time since the COVID-19 pandemic forced them to close.

While walk-in visits will be available, Kijakazi urged people to avoid long lines and delays by scheduling appointments in advance. Appointments can be made online by visiting www.socialsecurity.gov or over the phone by calling 1-800-772-1213.

Dr. Kijakazi also offered other guidance for walk-in visitors to avoid lines. “Be aware that our offices tend to be the busiest first thing in the morning, early in the week, and during the early part of the month, so people may want to plan to visit at other times,” she explained. In order to protect the many Social Security beneficiaries with health vulnerabilities, field offices will continue to require masking, physical distancing, and self-health checks for COVID-19 symptoms. Face masks will be provided to visitors and employees as needed.

“It is good that the offices have reopened,” said Joseph Peters, Jr., Secretary-Treasurer of the Alliance. “Now if SSA could get the full funding that it needs from Congress, we’d really be improving things for Social Security beneficiaries.”

The omnibus spending bill that Congress passed last month provided SSA with an increase in funding over last year, but it was $1 billion less than what President Biden had requested.